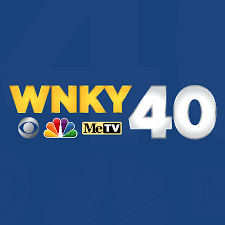 WNKY branded as WNKY NBC 40 launched on Dec 17, 1989 is a joint NBC and CBS affiliate broadcasting in Kentucky. Owned by Marquee Broadcasting, the channel is headquartered on Emmett Avenue in Bowling Green with a transmitter installed on Pilot Knob in Smiths Grove along I-65. Charter Spectrum broadcasts the WNKY NBC on Ch 7 and CBS on 10. Rural Telephone Cooperative cable and Glasgow Electric Plant Board are the local cable system that carry the channel.

History as an Independent Service

Granted construction permit in 1983, the channel first signed on air on Dec 17, 1989 WQQB; it was a non-affiliated service airing on UHF analog ch 40. WQQB would offer general entertainment programs including a mix of low-budget syndicated content consisting of sitcoms, cartoons, old movies westerns and classic movies.

World Broadcasting Network the founder and original owner of the channel released it to Southern Communications for USD 1mn in 1991. It changed its calls to WKNT on Jan 10, 1992 and signed a fox affiliation to change its branding as Fox 40. Despite being a Fox affiliate, it would broadcast Shot at Home Network programs and UPN block programming Disney’s One Too. The channel was taken over by Crossroads Communications on Jan 1, 1997 via an LMA: Local Marketing Agreement; Crossroads was an arm of Northwest Broadcasting. The subsidiary bought the channel outright on July 17, 2000.

WNKY became the new call letters of the station on March 27, 2001 after it parted ways with Fox in March 2001 to sign with NBC as a charter affiliate. Max Media in March 2003 emerged as the new owner of the channel after paying USD 7mn. It started hosting NBC content in HD on Aug 7, 2004.