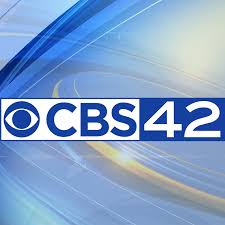 Slogan: Local Coverage You Can Count On

WSGN-TV was the first station to occupy UHF Channel 42 in 1949 when Birmingham News Company was allowed for a construction permit by FCC. It joined hands with The Voice of Alabama to build a broadcast tower on Red Mountain.

In partnership with Bill DuBois in 1956, Southern Broadcasting announced to build a third commercial station in Birmingham, however, the plan couldn’t materialize timely because of the shortage of transmission equipment owing to the Korean War. It went on air on Oct 17, 1965 as WBMG at Channel 42; the maiden program broadcasted by the station was NBC’s The Capitol: Chronicle of Freedom. It would then carry a mix of NBC and CBS programming during prime time four hours each evening before the expansion of its broadcasts to five hours on Nov 1, 1965. CBS Evening News was also part of the lineup.

In 1969 Southern Broadcasting and DuBois renewed their efforts to improve the strength of the signal by building a transmission tower and also by constructing a news studio facility on Golden Crest Drive. However, the improvements didn’t make any good to the situation of the channel which was then sold by the partners to Park Communications in 1973 for USD 5.5m. Park augmented the signal strength and by setting up another tower in 1974.

Media General acquired the station from Park Communications in 1997 and changed the call letters to WIAT on Feb 1, 1998. The New GM of the WIAT, Eric Land in Jan 1998 fired all but one member of the news operations staff and made fresh hiring for the Channel 42. He also introduced the countdown clock in the station on Feb 5, 1998. On the same date newscast 42 Daily News was also launched. Under the leadership of Bill Ballard in 2003, who assumed the charge as new president and GM, a complete overhauling was introduced in the programming; syndicated programs such as Entertainment Tonight, Dr. Phil and Jeopardy were included the lineup.

Under the Ownership of Media General for the Second Time

Media General once again started its second stint of the ownership of WIAT in Aug 2014 and the channel was rebranded as WIAT 42.

On Jan 17, 2017, Media General merged its operations with Nexstar which became the news owner of the WIAT. Under the ownership of Nexstar, a fourth subchannel switched with Laff Newtwork was launched on Nov 1, 2017.

CBS This Morning is a morning show produced by CBS, the program focuses on national and international news and provides in-depth reports and pre-taped interviews from its set.

The programming block is produced by Litton Entertainment; the show emphasizes on the educational needs of teenagers aged between 13 and 16.