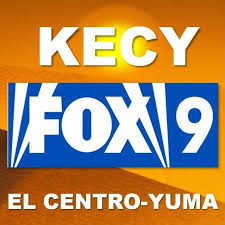 KECY-TV branded as Fox9 is a Yuma, AZ based station owned by News-Press & Gazette Company with El, Centro, California as its city of license. KESE-LP is its sister affiliated with Telemundo; it also operates KYMA-DT and KSWT via SSA: shared services agreement. The stations are located under one roof on South 4th Avenue in downtown Yuma while the advertising sales office lies on West Main Street in El Centro. The transmitter of the broadcaster is installed on the Chocolate Mountains.

Watch KECY-TV live streaming from Yuma, California. Fox9 is a source of top news stories of the hours, weather and sports updates, photo galleries and more. Wait as the stream loads.

FCC on Sep 4, 1962 allocated Ch 7 and 9 to El Centro thus giving the Imperial Valley its maiden VHF television. Just before the implementation of the permit, Tele-Broadcasters of California, Inc. requested a waiver from FCC and building of a service on Ch 7 on July 5, 1962. A competing application from KXO-TV, Inc. also surfaced on Sep 14, 1962. The ball was in the court of Federal Communications Commission as who would be granted the construction permit. In order to avoid any inconvenience because of delays in construction, on Nov 9, 1962, Tele-Broadcasters opted Ch 9. FCC approved KXO-TV for Ch 7 and KECC-TV for Ch 9 on April 10, 1963; soon after the approval KECC was welcomed by ABC for affiliation o Sep 1, 1963.

However, the delay occurred in build-out when KIVA owner appealed against FCC’s decision and filed for review of the decision that allowed KECC the construction permit. He reasoned that El Centro and Yuma markets were too small to support multiple local broadcasting agencies at that time. However, Federal Communications Commission turned down KIVA’s application on July 30, 1963 but the case was taken to federal appeals court where the verdict came in favor of the El Centro stations. Even after the legal settlement, KECC was not geared up for the launch and received a number of extensions from FCC.

The channel merged with construction permit of KECC and its two radio assets with United Broadcasting Co. for USD 1.9m; FCC approved the deal in April 1963. It made some significant gains when FCC allowed the channel to relocate its transmitter form El Centro to Black Mountain and augment the ERP from 55kW to 120 kW enabling it to serve both Yuma and El Centro audiences. On Dec 11, 1968 it formally started broadcasting ABC’s content as an affiliate after a wait of six years since it was allocated to Ch 9. Everything went good for the ABC affiliate when KIVA, an NBC affiliate in the market announced its closure at the end of Jan 1970. The affiliation was transferred to KBLU (later KSWT-TV) while KECC occupied CBS as its secondary affiliate.

United Broadcasting then announced to release its asset to Esquire Inc. in March 1981; the sale was approved by Federal Communications Commission in Sep and closed in October. Under the new ownership: Pacific Media Corporation, a subsidiary of Esquire, Inc. the calls were changed from KECC to KECY-TV in Dec 1981; it also returned to ABC as its affiliate on Feb 1, 1982. KECY finally received the license on June 30, 1982 after operating under PTA for 13 years.

After working for more than 30 years in El Centro, KECY in Feb 2002 decided to shift its operations to Yuma by April 2002 citing the signal interference to its microwave signal as the cause of action. NPG in May 2008 became the new owner of the service following the approval of FCC. It started broadcasting in HD in 2009. News-Press & Gazette Company on July 2, 2014 revealed their signing of SSA with Blackhawk Broadcasting to operate KSWT and KYMA from its studios which also house KECY. You can watch the station online. Here is the website: www.kecytv.com