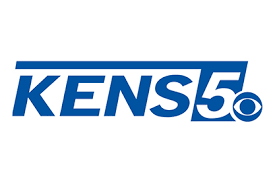 KENS broadcasting in San Antonio market of Texas is a CBS affiliate and is owned by Tegna, Inc. The studios of the channel are located on Fredericksburg Road in the Mockingbird Hill neighborhood of northwest San Antonio with transmitter is located near US 181 in northwest Wilson County. It is available on Ch 5 on most cable systems in the San Antonio area.

KENS hit the waves on Feb 15, 1950 as KEYL and was the second television station in the San Antonio market launched 3 months after WOAI, market’s primary NBC affiliate. It since its onset is a CBS affiliate despite initially carrying secondary affiliations with Paramount Television Network, DuMont and ABC. KEYL served as one of Paramount’s strongest affiliates and cleared almost all of its daily lineup. It paramount programs included Hollywood Reel, Movietown, Latin Cruise, Time for Beany, Armchair Detective and Hollywood Wrestling.

KABC and sister KEYL were acquired by Storer Broadcasting in 1951. It became KGBS-TV on Feb 1, 1954 to align itself with sister KGBS on March 1, 1954. In Nov 1954, Storer had to sale KGBS to San Antonio-Express News which changed the call sign to KENS-TV. The channel was purchased by Harte-Hanks Communications in early 1962 and in 1993 the company got its hand on KENS 1160 AM radio. E.W. Scripps Company in Sep 1997 acquired Harte-Hanks media assets but released it to Belo on Dec 4, 1997.

The channel then started managing KBEJ linked with UPN in Aug 2000 via an LMA and remain in charge of its operation for almost a decade before the deal expired in April 2010. Gannet Company on June 13, 2013 announced the acquisition of Belo broadcasting assets; the deal was approved by Federal Communications Commission on Dec 20, 2013 and consummated on Dec 23, 2013 as the channel regrouped with its Harte-Hanks era sisters WTLV and WFMY. Gannet split into two arms on June 29, 2015 making KENS newly formed Tegna, Inc. service.

Apart from clearing all of CBS programming, KENS broadcasts syndicated programs including Right This Minute, The Ellen DeGeneres Show, Jeopardy!, Extra and Wheel of Fortune. It presently broadcasts 31.5 hours of local news bulletins with 5 hours on each weekday and 3.5 hours on Sat and Sun. You can watch KENS online and follow it on Facebook, Twitter, YouTube and Instagram. Here is the website: https://www.kens5.com/