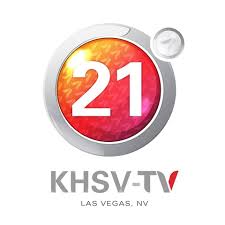 KHSV broadcasting on virtual channel 21 is a Heroes & Icons affiliate owned by Howard Stirk Holdings. The transmitter of the station is installed at Black Mountain near Henderson. Previously a MyNetwork affiliate under the ownership of Sinclair Broadcast Group, the company divested its interest in the channel and released it to Howard Stirk Holdings in Jan 2015. This all started after Sinclair acquired KSNV-DT, an NBC affiliate from Intermountain West Communications Company.

FCC granted the construction permit to Frank Scott in March 1982 for a full-power station that would operate in Las Vegas via UHF Ch 21. Frank Scott registered his company as Dres Media Inc. and channel as KRLR in Dec 1982. The channel branded as Vusic 21 went on air as independent station on July 31, 1984 and at beginning only aired music videos. Apart from over the air broadcasts, the station was carried by Prime Cable on Ch 2. Its maiden video was “Video Killed the Radio Star”. KRLR in mid-1985 started airing classic television programs and also introduced World Class Championship Wrestling produced from Dallas, TX. It by 1987 replaced the music videos with more conventional programming including movies, sports programming dramas and sitcoms. In its sports slot, the channel was known for being the official home of UNLV Runnin’ Rebels Basketball.

Dres Media in May 1994 released the station to Lambert Broadcasting for a fee of USD 2.85m. It became an affiliate of UPN on Jan 16, 1995 and the calls of the channel were changed to KUPN. Two years later, Lambert sold the station to Sinclair Broadcast Group for no less than $87m in April 1997. The affiliation under the new owner was switched to The WB on March 1, 1998; the calls were changed on May 27, 1998 to KVWBZ to reflect the change in ownership. It shifted to Ch 12 on the local cable carrier when Prime Cable was sold to Cox Communications in 1999. In June 2006 Sinclair following the dissolving of UPN and WB and formation of The CW, chose MyNetworkTV as the new affiliate for the station which then became KVMY in honor of the news affiliation. The channel started simulcasting the content of NBC in 2014 but ended the simulcasts of the network in 2015 and carried the programming of Antenna TV and Cozi TV. Intermountain West Communications sold KVMY to Howard Stirk Holdings owned by Armstrong Williams on Oct 30 2015. The calls were changed to KHSV under the ownership of HSH on March 7, 2016.