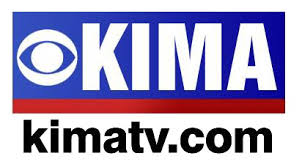 KIMA-TV owned by Sinclair Broadcast Group is a sister to Class A Univision affiliate KUNW-CD and affiliated with CBS. The two sisters share studios on Terrace Heights Boulevard in Yakima with transmitter located on Ahtanum Ridge. Taking Action For You is the slogan of the channel. KEPR-TV and KLEW-TV in Tri-Cities and Lewiston, Idaho respectively are the semi-satellites of the service. The satellites repeat the parent channel most of day time and during early evening news-bulletins but air separate legal identifications and commercial inserts. Both have their own websites. Master Control and some of the internal operation of the four channels are located in KOMO Plaza in Seattle. DirecTV and Dish Network, both carry KIMA and KEPR on satellite.

KIMA went on air on July 19, 1953 as Central Washington’s first channel and 200th in US. It was originally owned by Cascade Broadcasting Company which also owned KIMA 1460 AM. It would share content from the big four but was primarily affiliated with CBS. It dropped ABC when KNDO was launched in 1959 and dropped ABC when KAPP went on air in 1970. While DuMont was lost when it cancelled its operations in 1955. FCC just before the launch of KIMA dissolved the Tri-Cities and Central Washington into one big market. It soon became clear that channel 9 was not strong enough to cover the giant market. Cascade then launched KEPR-TV in 1954; the channel would act as a fulltime translator of KIMA but became more of a local service because of its demand.

It at that time also operated a satellite, KBAS-TV which went on air on Feb 15, 1957 in Ephrata, Washington. Initially launched on Ch 43, it shifted to Ch 16 in 1958. Cascade owned the satellite through its subsidiary Basin TV Company until its closure on Nov 30, 1961. Cascade was purchased by Filmways in 1969 but it sold KIMA and its satellites to NWG Broadcasting in 1972. In 1986 Retlaw Enterprises acquired NWG assets for $17 million. In 199 Fisher Communications acquired the Retlaw stations. In August 2013, Fisher release KIMA and its other channels to Sinclair Broadcast Group.

Syndicated programs broadcasted by the channel include The Big Bang Theory, Harry, The Simpsons and Jude Judy. KIMA Action News at 5 is the news program as the channel only offers Yakima-focused news. Audiences can watch news, weather and sports updates, features, Chime in and trending stuff. Follow the channel on Facebook and Twitter. Here is the website: https://kimatv.com/