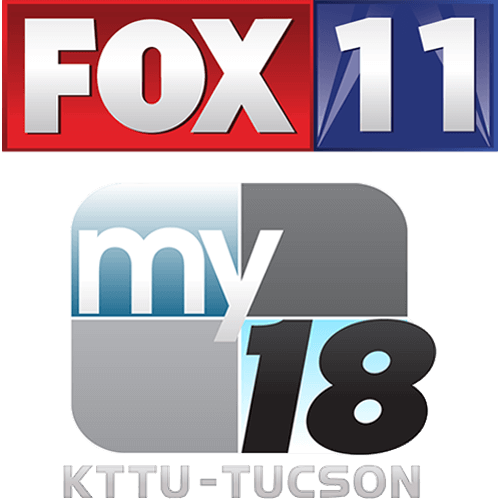 KTTU launched on May 21, 1983 is a MyNetworkTV station owned by Tucker Broadcasting and is operated by Gray Television via a shared services agreement, however, advertising sales are managed by Tegna Inc. through a JSA. It shares studios with KMSB and KOLD on North Business Park Drive on northwest side of Tucson. The transmitter is installed atop Mount Bigelow.

On March 21, 1983, a construction permit was granted to KTTU while the channel signed on air on Dec 31, 1984 under calls KDTU as an independent station with family friendly programing; it was originally owned by Roman Catholic Diocese of Tucson. The programming of the station would include sitcoms, cartoons, classic movies, sports programming and dramas. It would also cover the games of DePaul College Basketball and Notre Dame and Marquette which reflected the ownership of ministry. It along with KPOL was the second independent station to be launched in Tucson market. It also used to host 30 min of religious content on weekdays. Despite being under the ownership of a religious organization, KDTU was the 2nd service with least amount of Evangelic content out of all commercial television outlets in Tucson area.

While majority of markets with the size of Tucson would only offer one independent commercial station, Tucson supported no less than three. The channel didn’t seem profitable and was thus put on sale by Diocese in 1988. The channel was then sold to Clear Channel Communications in 1989. The change in ownership also brought change in the calls which was changed to KTTU in on April 1, 1989. KTTU were previously assigned to Fairbanks, Alaska-based station. With a slight change in the programming the presentation became more modern however, the station was still in loss despite the fact that Ch 40 was taken down and the market saw the competition of only two commercial independents. Clear intended to shift its focus to other markets and consolidate on its radio broadcasting thus signed an LMA with KMSB which was affiliated with Fox Broadcasting Company. KMSB relocated itself to KTTU’s cutting-edge facilities.

Belo Corp in 1997 acquired KMSB from Providence Journal Company and stated operating KTTU under LMA which had opted UPN in 1995; Belo continued to run the station licensed to Clear until 2002. Upon the merger of The WB and UPN in Jan 2006, the channel moved to the newly launched Fox Network MyNetworkTV in March 2006.

Belo then decided to enter into a SSA with Raycom Media in that would take effect in Feb 2012. Through the agreement KTTU and KMSB went into the control of KOLD-TV a CBS affiliate in the market. The advertising Sales department and MCR was shifted to KOLD-TV while the remainder of the departments of the two were eliminated. KTTU was then acquired by Tucker Broadcasting in 2013.

Divorce Court, The 700 Club, American Dad! And Grace Under Fire are among the notable syndicated productions offered by the KTTU.