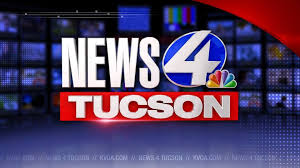 KVOA Tucson, AZ is an NBC affiliate that covers Tucson and Arizona local news on Channel 4. Owned by Cordillera Communications, a subsidiary of Evening Post Industries, the station is headquartered at West Elm Street north of Tucson while transmitter is maintained atop Mount Bigelow in northeast of Tucson. K04QP-D is the LP translator installed in Casa Adobes, AZ.

The channel was inaugurated in Sep 1953 as Tucson’s second television service primarily affiliated with NBC; only second to KOLD-TV which got launched eight months earlier while linked with CBS. It was affiliated with ABC as a secondary affiliate until 1956 when it lost the status to KDWI (later KGUN). It also maintained affiliation with NTA Film network briefly somewhere in 50s.

Chicago advertising executive John Louis, Sr. was the original owner of the service; he would also own KVOA 1290 AM (later KCUB). Phoenix-based KTAR was the other sibling of Louis-owned asset. The channel broadcasted Tucson’s maiden live event with the airing of World Series in Oct 1953. The company was later renamed as Pacific & Southern Broadcasting with headquarters in Phoenix. The owner John Louis, Sr. decided to release KVOA to Clinton D. McKinnon and sold it in 1955. The latter then acquired KOAT-TV located in New Mexico to form Alvarado Television. The Alvarado assets were then acquired by Steinman Stations in 1962.

Steinmans then gave away its controlling stake in KVOA to Pulitzer publishing in 1968 who then got hold of their maiden acquisition outside St. Louis, Missouri which served as the home base to the publishing and broadcasting service. A year later Pulitzer bought the complete stake in KOVA. The spinoff share of KVOA in 1972 was acquired by Channel 4-TV in 1972 as the employee group was facilitated due to FCC’s regulations on cross-ownership rules. During the same time the group was also able to acquire full stake in KVOA.

In 1982 owner of the Houston Post, Hobby family looking to step into the broadcasting business acquired the service. H&C sold its broadcasting assets in 1993; KOVA was bought by Evening Post Publishing Company. In April 2007, the channel became the first Tucson station to broadcast in HD. In Oct 2018, Quincy tried to sale all of its broadcasting assets to E.W. Scripps Company however, the latter couldn’t make the deal under the FCC regulations which permit maximum of two stations in a city which Scripps already had in the form of KWBA and KGUN. Consequently it was sold to Quincy Media in for USD 70m; the sale is pending and would be completed following the approval of Federal Communications Commission.

Apart from clearing all of NBC’s lineup as a primary affiliate, the channel also broadcasts syndicated content including Rachel Ray, Inside Edition, Dr. Phil and The Dr. Oz Show. Anchor Sean Mooney is among the notable on-air staff of the station. You can watch KVOA online for latest news, weather, sports updates, community events and more. Follow Channel 4 on Facebook, Twitter, YouTube and Instagram. Here is the website: www.kvoa.com/