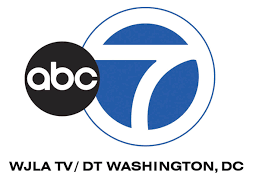 WJLA launched on Oct 3, 1947 is an ABC affiliate licensed to Washington, DC and owned by Sinclair Broadcast Group of Hunt Valley, Maryland. WJLA 24/7 News is the sister of the service. The two siblings share space on Wilson Boulevard in the Rosslyn section of Arlington, Virginia while its transmitter is installed in the Tenleytown neighborhood of northwest Washington. It is carried by Comcast Xfinity and Cox Communications on Channel 27 and Ch 7 respectively. RCN and Verizon FiOS are also the cable carriers of the service.

As District of Colombia’s 3rd station, the channel went on air on Oct 3, 1947 as WTVW under the ownership of Washington Star; WMAL radio 630 AM, the radio sister also got launched on the same date. The VHF high-band station changed its calls to WMAL-TV to match its identity with radio sisters. It signed affiliation with CBS after its inception. Upon the launch of ABC in 1948, WMAL shifted its loyalties to the upstart network as its third primary affiliate however, it continued to carry some of CBS’ programming until WOIC took over the affiliation. It was also linked with NTA Film Network during 50s.

The controlling interest was then acquired by Joe Allbritton, a Houston businessman in Star’s media properties in 1975. It split from its radio sisters when ABC acquired WMAL-AM-FM in March 1977. The calls were changed to WJLA-TV during the same month. Allbritton in a swap deal in April 1977 released the channel to Combined Communications Corporation for Oklahoma-based KOCO-TV however, the deal couldn’t close and was cancelled in last moment despite having approval of Federal Communications Commission. Washington Star, the publishing arm was sold to Time Inc. in Jan 1978 however, Allbritton retained WJLA along with Charleston and Lynchburg stations to build Allbritton Communications later.

There were reports about possible purchase of WJLA by ABC in mid 90s which once materialized would reunite the station with its former radio sisters however, the deal couldn’t complete. On the contrary ABC sold most of its radio assets including WRQX and WMAL to Citadel Broadcasting Corporation in June 2007. WJLA under the ownership of Allbritton maintained its exclusive affiliation with ABC. Following WJZ’s signing with CBS in 1995, it became the longstanding ABC affiliate.

WJLA started simculasting WTOP-FM on its digital sub-station Weather Now in Dec 2007 while also picking WWTD-LP for simulcasts in in late Oct 2008. WeatherNow was dropped in late July 2009.

As an exclusive ABC affiliate in the market, the station clears all of network’s programming. Wheel of Fortune, Live with Kelly and Ryan, and Jeopardy! are some of the notable programs offered by WJLA. It also serves as the flagship home of The McLaughlin Group while also broadcasting Sinclair-required program Full Measure.

At present, the channel broadcasts 34 hrs and 5 min of local news-bulletins weekly with 6 hrs and 35 min on each weekday and 1 hour for each Sat and Sun. 40 on-air staffers make it the service with largest news team in Washington area. Audiences can watch WJLA-TV online for Washington, D.C. news, weather and sports updates and entertainment fees. Stay connected with the station using Facebook, Twitter, Instagram and YouTube. Here is he website: https://wjla.com/