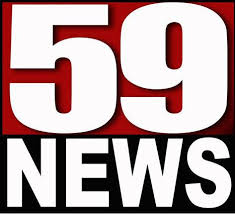 WVNS branded as CBS 59 is a dual Fox-CBS affiliate licensed to Lewisburg, West Virginia and carries operations in Bluefield-Beckley-Oak Hill market while also covering pockets of southwestern Virginia. Nexstar Media Group is the owner of the service. The offices of the channel are maintained on Old Cline Road in Ghent, West Virginia with transmitter installed near Anderson, West Virginia.

Read More
Catchphrase: Working For You

WVGV-TV went on air as WB affiliate on Aug 12, 1995 and was the maiden outlet to be affiliated with one of the big three networks. Originally meant to hit the waves in 1994 as a Fox affiliate, the service suffered a delay and consequently missed on a chance to be a Fox affiliate in the market. It also faced difficulty in selling advertising time in urban-oriented content offered by The WB and was not quite successful in competing with a UHF signal in a market that was a traditionally supported by VHF broadcasters. The delay in launch also halted it to get carriage on the cable operators. The mountainous market demanded WVGV to be on the cable systems. By the time cable systems agreed to carry the station, it was sold to High Mountain Broadcasting; under the new owners it was relocated from Lewisburg to Ghent with transmitter facilities also transferring to a new site. On Dec 24, 1996, the station was back on air as WVSX, a Fox affiliate. The financial struggles were marring the status of the outlet until it decided to sign with CBS; it became a CBS affiliate on Sep 29, 2001. It was acquired by West Virginia Media Holdings on Feb 28, 2003. Following the trade, the company released three of its four CBS affiliates operating in West Virginia. Under the new ownership callsign was changed to WVNS-TV. It then improved itself quickly to move to #2 position in the market by beating WOAY and was only behind WVVA in rankings. It acquired another Fox affiliation on its second digital sub-channel on Sep 13, 2006. Nexstar which announced its purchase of West Virginia Media Holdings assets bought the channel on Jan 31, 2017.

The syndicated programming cleared by the channel includes The Big Bang Theory, The Dr. Oz Show, Wheel of Fortune, 2 Broke Girls, Judge Judy, Rachel Ray and Jeopardy!. It also offers MyNetworkTV programs on weeknights. It on March 28, 2013 became the maiden service in the market to turn its news-bulletins in HD. With the acquisition by Nexstar Media Group, the weather operations were relocated to Ghent. Top news stories of the hour, weather and sports, updates, political developments, community events, contests, Video Center and more can be find online. Follow the station on Facebook and Twitter. Here is the website: https://www.wvnstv.com/