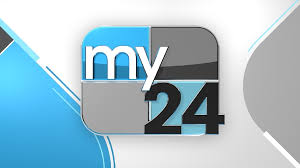 WVTV-DT2 aka my24 is a MyNetworkTV affiliate owned by Sinclair Broadcast Group which formerly operated as WCGV-TV. It is a second digital sub-channel of WVTV: Ch 18 which is hosting it since Jan 2018. It still uses the branding my24 employed by it since it was a full-power broadcaster. My Place for ___ is the catchphrase used by the service. The studios of the channel are located on Calumet Road in Park Place office park near the I-41/U.S. 45 interchange.

B&F launched the channel on March 24, 1980 from its original facilities on North 27th Street also used by CBS-affiliate WITI; WITI moved to another location in Brown Deer in 1978. WCGV was an independent station that broadcasted movies, cartoons, drama series and religious programs during the day time while also accepting select NBC and CBS content rejected b WTMJ and WITI. Tempo 24 was a well-recognized afternoon talk show backed by local production. It dropped SelecTV in 1984 in order to gear up for WVTV: Ch 18. It was branded as TV-24

WCGV got affiliated with Fox on March 15, 1987 as the network was turned down by WVTV in 1986. It was renamed as Fox 24. WCGV was acquired by Abry Communications in 1990. It continued with general entertainment programming under the new ownership while signing an LMA with Gaylord-owned WVTV in 1994. With the change in ownership and following Local Marketing Agreement it shifted itself to North 34th Street and Capitol Drive.

On Jan 16, 1995 it became a charter affiliate of UPN; it had already dropped the Fox’s affiliation a year later on Dec 4, 1994 and was operating as an independent in the meantime. The channel was purchased by Sinclair Broadcast Group in 1995 under which it became a MyNetwork affiliate in Sep 2006.

Sinclair released UHF spectrum of WCGV following an auction conducted by Federal Communications Commission on April 13, 2017 as it turned into WVTV-DT2.

The Simpsons, Access Live, Lauren Lake’s Paternity Court, Divorce Court, Celebrity Page and Last Man Standing are the syndicated programs produced by the station. News, weather and sports updates, community updates, Inside My24, contests, trending videos and more. Follow the channel on Facebook and Twitter. Here is the website: http://my24milwaukee.com/