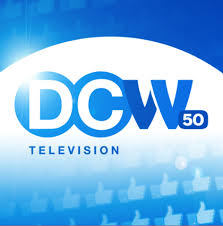 DCW50 established since 1981 is a CW-affiliate owned by Tribune Broadcasting, a division of Tribune Media Company. Channel 15 (UHF) operates in Washington, DC from Wisconsin Avenue in the Glover Park with transmitter installed in Tenleytown; the transmitter site is also in use by WFDC-DT. Comcast Xfinity is the prime cable carrier that disseminates Channel 50 in Washington, DC, Maryland, Reston, and Montgomery. DirecTV serves as the satellite carrier of the service. It is also available in the JetBlue’s in-flight entertainment service.

A construction permit was approved by Federal Communications Commission in 1967 for Ch 50, Inc. The plans to launch the service in the summer of 1971 fell through due to the sudden death of the founding owner Ted Granik (host of American Forum of the Air) on Sep 21, 1970. Granik didn’t leave any funds after him which resulted in the channel announcing bankruptcy. Ted Ledbetter who also owned WBNB-TV after some legal hurdles succeeded in purchase of the station and launched it on April 1, 1981 as WCQR. It aired its first broadcasts on Nov 1, 1981 by hosting SuperTV programming at night. Channel 50 then began broadcasting Financial News Network content and was acquired by Hill Broadcasting along with WHLL in 1985. WFTY became the new calls of the station on July 1, 1985 while it became a non-affiliated service in 1986. As an independent station WFTY offered movies, sitcoms, westerns, religious programs and kids programming/cartoons. It in 1986 would also broadcast Ryan’s Hope produced by ABC and kept running it until its end. Ratings were quite low during that time with infomercials, religious programs and movies.

On Feb 20, 1995, soon after the launch of the network, WFTY got linked with The WB. WBDC-TV was the new identity of the station incorporated on Sep 6, 1995. Tribune Company entered the scene in 1996 to manage the channel and went on to purchase in from Jasas Corporation later in 1999.

Following the merger of The WB and UPN in early 2006 and subsequent launch of The CW, the service joined the upstart rechristened network. Tribune entering a 10-year affiliation with The CW changed the calls to WDCW and joined the network formally when it launched on Sep 18, 2006. In Aug 2008 Channel 50 was rebranded as DC50.

WDCW after cancellation of its sale to Sinclair has now pending sale status to Nexstar which announced the acquisition of the Washington station on Dec 3, 2018

The Jerry Springer Show, Maury, Crime Watch Daily and The Steve Wilkos Show are among the notable syndicated programs hosted by the service. Watch CW Shows, local news, weather and sports updates, community events and more online. You can connect with DC50 using Facebook, Twitter and Instagram. Here is the website: https://dcw50.com/