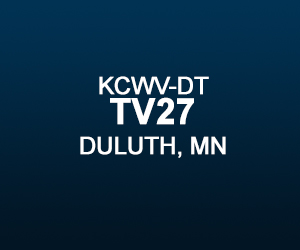 KCWV-TV is a Duluth, Minnesota based channel affiliated with AMGTV. Channel 27 airs from KDLH tower on Duluth’s Observation Hill. Owned by Flinn Broadcasting Corporation, 27.1 AMGTV is the sub-channel operated by the service.

Federal Communications Commission gave George S. Flinn, III a construction permit for the digital-station for UHF: Ch 27 on Dec 6, 2006. It hit the waves on Nov 30, 2009. The founder and owner Flinn, a Memphis-based businessman held WPXX and WPXL in Memphis and New Orleans, both Ion Television affiliates until 2007. At its onset, the channel was affiliated with My Family TV however, a year after it got linked with Legacy TV, a religious network. The Christian network at the end of 2012 was renamed as The Walk TV. In Oct 2013, the service switched its affiliation to AMGTV, a generalist family TV network. KCWV went off air on Sep 17, 2014 for a couple of months due to maintenance work at its tower. On Sep 21, 2015, the station made its return to the airs and is operating to the date.