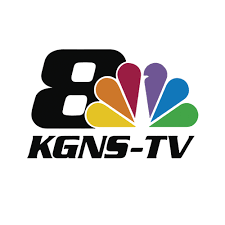 KGNS-TV launched on Jan 7, 1956 is a joint ABC, NBC and Telemundo affiliate broadcasting in Laredo, TX. Gray Television is the owner of the channel that shares duopoly with KYLX, a low-power digital station broadcasting on Ch 13. The two sisters are located under one roof on Del Mar Boulevard in norther Laredo with transmitter installed in northwest of the city. Charter Spectrum, DirecTV and Dish Network are the cable carriers of the primary NBC affiliate.

Watch KGNS stream online from Laredo, Texas for latest news from Laredo, weather and sports updates. Stream may take a moment to load.

KGNS signed on air as KHAD-TV on Jan 7, 1956 and was a primary NBC affiliate while having secondary affiliations with ABC and CBS. In Dec 1973, it had to drop CBS after the launch of KVTV while ABC was captured by KLDO-TV in Dec 1984.; KLDO is currently affiliated with Spanish language network Univision. On Sep 1, 1958, Donrey Media Group acquired KHAD-TV and the calls were changed to KGNS-TV. Century Development Corporation bought the channel in 1985 and it started to air Spanish language news-bulletins in 1990.

KGNS 8 got linked with UPN in 1998 and remained a United Paramount Network channel until 2000 and then moved to WB. The channel 8 was purchased by SagamoreHill Broadcasting in 2004; FCC approved the deal on Dec 1, 2005. Upon the launch of The CW in 2006, it became the affiliate of the upstart network made by the unification of UPN and The WB. It added Telemundo on its sub-channel 3 in 2010 for Spanish language news. The primary NBC affiliate then entered an agreement with ABC on Nov 6, 2013 that would see the network aired on its subchannel 8.2 by Feb 2014. However, the ABC programming entered the channel on July 1, 2014.

The CW was picked up by KYLX-LP but not before Oct 2015. It presently broadcasts the programming from NBC, Telemundo and ABC. Noticias en Español, Telemundo Laredo and En tu Casa are the Spanish-language news programs aired by channel 8. It completed digital transition on June 12, 2009 and dropped its analog apparatus. You can watch local and national news, weather and sports updates, videos and more online. Find the station on Facebook and Twitter. Here is the website: https://www.kgns.tv/