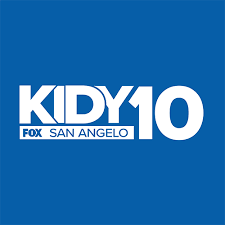 KIDY is a San Angelo, Texas based news television station owned by Tegna Inc. Launched on May 12, 1984, the channel is located on South Chadbourne Street in San Angelo with transmitter installed in rural northwestern Tom Green County. The Master Control of the television and some internal operations of Abilene-based sister, also a Fox affiliate are managed by KIDY.

KIDY hit the waves on May 12, 1984 as an independent service that carried FNN’s business programs until 1985. It became a charter Fox affiliate of the newly launched Fox network on Oct 9, 1986. At that time Fox only broadcasted The Late Show with Joan Rivers. It extended its programming to primetime on April 5, 1987. The branding of the channel was changed to Fox 10 in late 90s. In 2007 it became KIDY Fox San Angelo. Bayou City Broadcasting purchased the channel in 2008 for USD 3m.

London Broadcasting Company KXVA and other Bayou assets on Dec 31, 2012 following the approval of Federal Communications Commission. Gannet Company became the new owner of the KIDY and five other London Broadcasting assets for USD 215m on July 8, 2014. A year and a month later on June 29, 2015, Gannet split its operations into two arms, one for broadcasting and other dedicated to publishing business. KIDY was put under the umbrella of broadcasting division now knows as Tegna, Inc.

Apart form clearing all of Fox’s regular lineup, the syndicated programs offered by the channel include The Big Bang Theory, Modern Family, The Kelly Clarkson Show, White Collar, The People’s Court and The Simpsons. It presently broadcasts 2.5 hours of local news-bulletins each week with half-hourly newscasts on weekdays and has no newscasts on Sat Sun. Watch latest West Texas news, current weather updates, local headlines, featured videos, traffic reports and various national and world news online. Follow the station on Facebook and Twitter. Here is the website: https://www.myfoxzone.com/