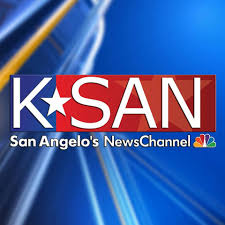 KSAN-TV owned by Mission Broadcasting, Inc. is an NBC affiliate serving San Angelo, Texas. The company also has ownership over KLST linked with CBS and operates KSAN through a joint sales and shared services agreement. The two sisters share the studio space on Armstrong Street in San Angelo with a transmitter fixed on SH 208 in north of the city.

KSAN went on air as KACB-TV on Feb 8, 1962 as a broadcast relay station of KRBC-TV operating in Abilene. Ackers family was the original owner of the station before it passed its assets to Sunrise Television in 1998. Under the ownership of Sunrise, it turned into and independent fulltime station in the San Angelo market having its own news dep., locally produced programs and local advertising operations on Oct 1, 1998. The company (Sunrise) merged with LIN TV in 2002 which in turn sold KRBC and KACB to Mission Broadcasting. Mission then changed the callsign of the station to KSAN-TV. The calls were originally allotted to San Francisco based UHF Ch 32 in 1954 but the channel became defunct due to its relatively small viewership later on; the UHF slot is now occupied by KMTP-TV.

Nexstar on June 15, 2016 revealed its deal to operate KSAN via an SSA: Shared Services Agreement and JSA: Joint Sales agreement. The channel currently operates as an NBC affiliate in 11 counties in West Central Texas and provides news and weather programing to Runnels. It airs 9 hours of locally produced news-bulletins each week with 1.5 hours on weekdays, 1 hour on Sat and 30 min on Sun. You can watch news, weather reports, local business programs, sports, lifestyle programming and community events online and follow Concho Valley station on Facebook and Twitter. Here is the website: https://www.conchovalleyhomepage.com/