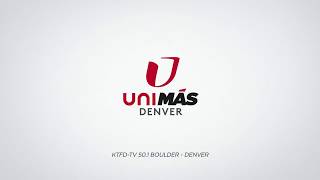 KTFD-TV branded as UniMás Denver is a Spanish language digital news station owned by Entravision Communications serving Denver, CO. The owner of the service also operates Boulder-based KCEC: Ch 14 under an LMA signed with Univision Local Media, a subsidiary of Univision Communications. The two sisters are located on Mile High Stadium West Circle in Denver; the transmitter of the channel is installed on Lookout Mountain near Golden.

Established by Roberts Broadcasting, the channel launched as KTVJ on Feb 22, 1996 and on its onset was a non-affiliated service. It was sold to Univision Communications in Jan 2003. Under the new ownership, two months later the call letters were changed to KTFD-TV on March 10, 2003. The digital transition in June 2009 saw the replacement of suffix TV with DT. Under Univision it became the secondary affiliate of TeleFutura during that time.

You can watch the Spanish language news and entertainment service online. Here is the website: www.somosnoticiascolorado.com/unimas