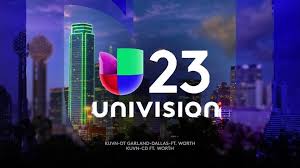 KUVN-DT is a Univision O&O Spanish language news channel active in Garland-Fort Worth market in Texas. Originally licensed to Garland, TX, the channel was launched on Sep 25, 1986 and has studios located on Bryan Street in downtown Dallas with transmitter fixed south of Belt Line Road in Cedar Hill. Univision Communications through its division Local Media had ownership over the digital station.

KTDX was the original recipient of channel 23 slot for Dallas-Fort Worth Metroplex under the ownership of Lakewood Broadcasting, a consortium supported by local oilmen of the area which were granted the construction permit by FCC against the desired calls in 1952 however, the station could never sign on air and the permit was eventually cancelled by FCC in 1955.

Richardson Independent School District went on air on Feb 29, 1960 on Ch 23 allocation as KRET-TV. It was the maiden service in US to be owned by a school district – KERA-TV followed the course eight months after. KRET could only broadcast on weekdays, initially four two hours before extending to the full school day but ceased operations in May 1970 to eventually become a closed-circuit television ‘TAGER’ on Aug 31, 1970.

The current station KUVN-DT was launched as KIAB on Sep 25, 1986 on Ch 23 under the ownership of International American Broadcasting. It at the beginning offered a blend of religious programs borrowed form Christian Television Network and Spanish language content sourced form Spanish International Network. It would also provide HSN content during the overnight hours. It originally broadcasted from studios located on Marquis Street in Garland.

KIAB was released by International American Broadcasting to Univision in 1988 becoming the second commercial network O&O channel in the Dallas market after KDAF, a charter Fox affiliate and property of the network airing on Ch 33. Under the new ownership the channel changed its calls to KUVN. KUVN-DT is the digital translators of the service broadcasting on low-power. It presently broadcasts 12 hours of locally produced news-bulletins. It started broadcasting in HD in 2012. Primera Edicion and Vive La Mañana are the programs shared by Univision 23. You can watch the station online and follow it on Facebook, Twitter, YouTube and Instagram. Here is the website: https://www.univision.com/local/dallas-kuvn