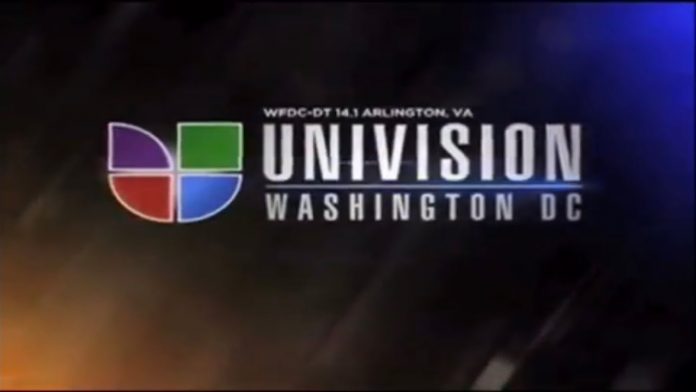 WFDC-DT launched on Aug 3, 1993 is a Spanish language news and entertainment station affiliated with Univision and broadcasting in Washington, District of Columbia. Univision Communications is the owner of the service though the channel is managed and operated by Entravision Communications which makes it a sister with Silver Spring-based WJAL, a Sonlife affiliate and WMDO-CD, a UniMas affiliate in Washington. It shares its studios with sister WMDO-CD on Constitution Avenue near the Capitol Building while having transmitter facilities in the Tenleytown. It also is the flagship Univision station to serve Baltimore.

Watch WFDC live from Washington, District of Columbia. Wait as the stream loads.

Before the launch of WFDC-DT the channel 14 went on air on March 6, 1963 as WOOK; it was the first African-American dedicated channel in the country. Teenarama was the flagship teen targeting dance show broadcasted by the channel. It became WFAN-TV in 1969. Under the ownership of United Broadcasting, it from 1968 to 1972 served as the sister of WMET in Baltimore Maryland. It went silent on Feb 12, 1972 after incurring consistent financial losses. W14AA in 1976 was the launched as the new translator of the Ch 14, the satellite relayed signal of WNVT from Annandale, Virginia. WFAN then shifted to Ch 48 in 1989 and was renamed as WMDO-CD.

WFDC was launched as WTMW on Aug 3, 1993. It would initially air variety of content before turning to HSN: Home Shopping Network programming. The channel then switched to Military Channel programing in May 1999. Military’s programming was dropped just one month later and Ch 14 shifted to Panda Shopping Network content. In Dec 1999, it became an affiliate of the American Independent Network. After signing with the new network, it would receive old sitcoms and infomercials. The affiliation was changed once again in Jan 2001 and it became a Renaissance Network affiliate. All the new formats coming with new affiliations seemed unviable and the channel was eventually sold to Univision Communications in Nov 2001 which changed its calls to WFDC. It then signed with the Univision-owned network Telefutura. WFDC first signed on air on Jan 14, 2002. It swapped affiliation with WMDO on Jan 1, 2006 to become a Univision affiliate.