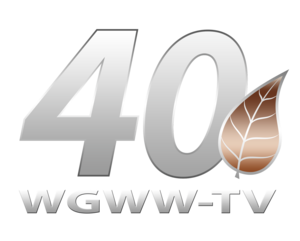 WGWW branded as WGWW Channel 40 is a Howard Stirk Holdings (HSH) station that operates in Birmingham, Alabama and is licensed to Anniston. WSES is the sister of the channel affiliated with Heroes & Icons. It is transmitter is installed at Bald Rock Mountain near Mood in St. Clair County.

Slogan: Working For You

It went on air as WHMA-TV on Oct 26, 1969 and served as a primary CBS affiliate and secondary NBC affiliate, at that time it was owned by Anniston Broadcasting Company. The owners also owned Aniston Star and WHMA 1390 AM based in Atlanta, Georgia. Its studios were located on Noble Street in downtown Anniston.

WHMA separated from NBC and adopted CBS as its affiliate in June 1970 and switched to CBS as a fulltime affiliate. It was among three CBS affiliates that served Central Alabama. The calls were changed to WJSU-TV but still maintained its identity as commercial channel. WJSU-TV was sold to Osborne Communications Corporation.

Allbritton Communications in Jan 1996 acquired the non-license assets of WJSU-TV from Osborne Communications for a fee of USD 12m. The new owner wanted to relocate transmitter to Birmingham but was not allowed by Federal Communications Commission as the Anniston licensed station have to change its city of license to a place near Birmingham. Allbritton who had purchased W58CK on Sep 1, 1996 signed affiliation with ABC; WJSU then became a broadcast relay station of W58CK.

Sinclair acquired the Allbrittion stations in July 2014 and thus secured the license of WJSU, WCFT, WABM and other assets held by the company. Sinclair on May 29, 2014 informed Federal Communications Commission that it had not able to find a buyer for WABM and was hence considering the licenses of WJSU and WCFT to the commission.

On Sep 28, 2014 Howard Stirk Holdings acquired WSJU-TV license assets from Sinclair. The programming was restored from WBMA-LD on Dec 3, 2014 and the calls were changed to WGWW on March 11, 2015. Heroes & Icons on Oct 1, 2015 allowed WGWW for affiliation.