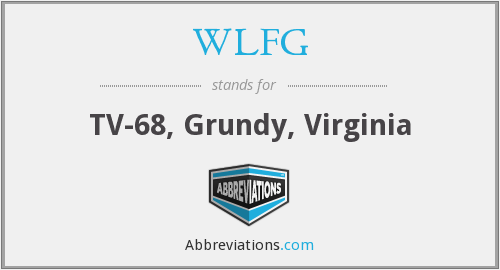 WLFG is a religious non-affiliated channel active in Grundy, Virginia. It serves Tri-Cities area of southwestern Virginia and northeastern Tennessee. Launched on Jan 2, 1995, the channel is owned by Living Faith Ministries, Inc. Its transmitters are located near Hansonville, Virginia and Harlan, Kentucky. WLFG’s programming is relayed on two satellite channels: WAGV and WLFB in Harlan and Bluefield, West Virginia. WAGV was the first broadcast relay station to offer exclusively digital broadcasts.

The Reverend Buford Smith in Virginia established Living Faith Television and it grew from the original station in Grundy to add two more transmitters. Rev. Smith served as pastor of Tookland Pentecostal Church in Grundy until his death in May 2003. His son Michael Smith was president of the channel until Buford Smith’s death, when he took over as President and CEO of Living Faith Television. Tookland Pentecostal Church served as the key financial backer of the channel however, the former distanced itself from WLFG when it declared independence in 2006. Living Faith Television is now run by a board comprised of CEO and wife duo Mike Smith and Lisa Smith respectively. Marry Smith, Fred Schmidt and Laverne Tripp are other notable personalities.

WLFG mostly broadcasts religious programs by ministries with some infomercials. Living Faith Now!, Sing Time, Life Begins at Calvary, and Fred Schmidt are the notable programs broadcasted by WLFG. Watch WLFG live online through its official website. Follow the channel on Facebook and YouTube. Here is the website: http://livingfaithtv.com/