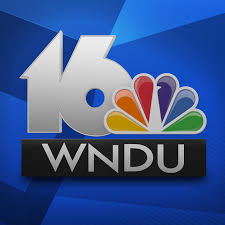 WNDU is an NBC affiliate serving South Bend, IN and is owned by Gray Television. The studios of the channel are located on State Road 933 on South Bend’s north side with a transmitter installed on southeast of the St. Joseph Country Fairgrounds on the city’s south side. U.S. Farm Report and AgDay are also produced at the studio facilities with latter broadcasted exclusively on WNDU.

Slogan: This is Home

WDNU first hit the waves on July 15, 1955 on UHF ch 46 under the ownership of Michiana Television Corporation, a division of University of Notre Dame. It took its call form WNDU 1490 AM (latter WNDV-FM) which was also owned by Notre Dame University until 1998. The full commercial television station was moved to UHF ch 16 in 1957. It immediately snatched NBC network affiliation form WSJV. At its onset the channel would programs including Romper Room, Sesame Street, Beyond Our Control and others.

Its studios were located on State Road 933 and Dorr Road which became operations in 1982. University of Notre Dame released the channel to Gray Television for USD 85mn on Nov 24, 2005; the deal consummated on March 5, 2006 after the FCC approval with a cross-ownership wavier handed in case of WNDU and The Goshen News, a daily. This was important as Federal Communications Commission guidelines did not approve the ownership of a newspaper and a television in the single market. It was named channel of the year by the Indiana Broadcasts Association for 2015 and 2016.

Gray in Sep 2015 revealed that it would buy Schurz Communication, the owner of WSBT-TV since its inception in Dec 1952. Despite the higher ratings of the channel Gray put WSBT on market and on Cot 1, 2015 announced that it would exchange the latter with Sinclair Broadcast Group for WLUC-TV. Federal Communications Commission gave the green signal to the deal on Feb 12, 2016; the dead was finalized on Feb 17, 2016.

WNDU currently airs 38.5 hours of locally produced news bulletins with 6.5 hours on weekday and 4 hours on Sat and two hours on Sun. It became the second television station in South Bend market to broadcast local newscasts in HD on April 21, 2010. WNDU kicked off a 4:00 pm news-bulletin on Sep 4, 2018. Notable syndicated programs aired by the channel include Dateline, Inside Edition, Entertainment Tonight, The Wendy Williams Show and Dr. Phil. Countdown to Kickoff is among the popular sports programs aired by the WNDU. Days of Our Lives is a soap opera while channel also broadcasts The More Your Know.