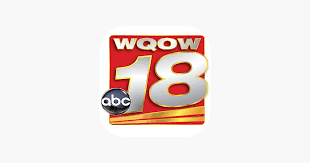 WQOW owned by Quincy Media and launched on Sep 22, 1980 is a CW affiliate licensed to Eau Claire, Wisconsin. The channel broadcasts in HD on Ch 25 in Chippewa Valley in Western Wisconsin from a transmitter and studios of WEAU, an NBC affiliate and a rival broadcasting on Ch 13 from a facility on South Hastings Way in Altoona. The channel has studio facilities located on Friedeck Road in Eau Claire. A semi-satellite of WXOW in La Crosse, the channel simulcasts all of ABC network content and syndicated programming however, airs separate local news-bulletins, legal on-air identifications, religious content and commercial inserts. The master control and internal operations of the channel are located on County Highway 25 in La Crescent, Minnesota. WXOW broadcasts in the southern-half of La Crosse-Eau Claire area while WQOW operates in northern portion. The two stations are consolidated as a single service for ratings. Dish Network and DirecTV are the prier carriers of both WQOW and WXOW sine Sep 2010.

WQOW hit the waves on Sep 22, 1980 for the first time. It during its first 10 years of broadcasting operations suffered with weak signal in northern half of the market. The transmitter of the service unlike other stations in the area is located with its studios in La Crescent, Minnesota. Due to this setting of transmitter alongside studios the audiences in Chippewa Valley and Eau Claire can only watch WXOW on cable.

The original studio facilities of the channel were maintained on Business US 53/Hastings Way east of the London Square Mall. It broadcasted the simulcasts of WXOW but got transformed into a more localized service by 1982. Following the arrival of new US 53 Bypass on the site of WQOW it shifted to its new location on WIS 93 on the south side of Eau Claire. In 1998 the duo WXOW and WQOW would operate the cable only affiliate of The WB registered as WBCZ.

Live with Kelly and Ryan, The Doctors, Rachel Ray, Inside Edition and Dr. Phil are the notable syndicated programs aired by WQOW. ABC News 18 is the source of latest Eau Claire new, Wisconsin and Chippewa Valley news, weather alerts and forecasts, sports stories, community events, contests and more. Follow the Channel 18 on Facebook, Twitter and Instagram. Here is the website: https://wqow.com/