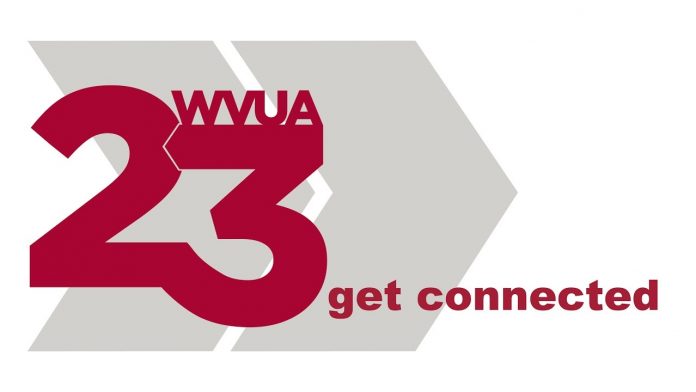 WVUA 23 is a Tuscaloosa-based channel owned by University of Alabama and is licensed to Northport. The transmitter and studios are maintained in the Digital Media Center at Bryant-Denny Stadium in the campus. The channel is one of the two commercial television services by a public institution, KOMU-TV owned by University of Missouri in Columbia is other one. Despite being in the ownership of University of Alabama System, the channel maintain financial independence and is not linked financially in any way with the University.

The full-power satellite WVUA licensed to Tuscaloosa guarantees the reach of the station to Birmingham-Tuscaloosa-Anniston market. Its transmitter is maintained on Red Mountain. The signal of the full-powered rebroadcaster is also relayed to LP translators WJMY-CD and WDVZ-CD in Demopolis and Greensboro. 80% of the employees of the University channel are the students recruited for different operations.

Slogan: Your Home Team | This is WVUA | Alabama’s Home Team

The construction permit was granted by FCC to the Krypton Broadcasting in 1994; W49BO were the calls assigned to the project. Krypton originally planned to use it as the translator of WAMB@Ch68. UHF Channel 49 went on air under calls WJRD-LP in 1998. The original studio location of the channel 49 was on Jug Factory Road which formerly hosted WDBB until it ceased its operations in Dec 1995. It became the charter affiliate of Pax TV in Aug 1999 and became the secondary affiliate when Paxon Communications (later Ion Media Networks) converted WNAL-TV into a Pax O&O service; the calls of the newly converted station were also converted to WPXH-TV.

The University applied for donation of a full-power channel to FCC in Nov 2004, the donation was received in March 2005 and the calls of the then full-power WLDM were changed to WUOA. The channel was then converted into a full power broadcast relay station under WVUA-CA to throw the signal deeper into the market of Birmingham market. The service became a part-time affiliate of This TV in Nov 2008 however, still carried syndicated content and local newscasts in vacant slots. Not clearing the full schedule of This TV, it is the largest part-time affiliate by market size. The calls of the rebroadcaster WUOA were changed to WVUA on May 8, 2015. The suffix CD was added to the station on June 3, 2015 when the commercial campus service was allowed to have a digital signal by Federal Communications Commission.

Channel 23 only broadcasts the overnight films and classic programming of This TV as a part-time affiliate. The Sundays and Saturdays make This TV offering even less due to the occupation of syndicated content and university’s sports programming. It carries most team-related programs with the focus on the Alabama Crimson Tide. The team coaches’ show The Nick Saban and Sports talk programs Tide Insider and Tide TV This Week are also included in the programming. The news department set up in 1998 at present broadcasts 8.5 hours of locally produced news-bulletins weekly.