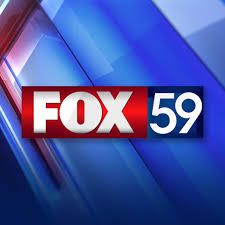 WXIN owned by Nexstar Media Group and launched on July 12, 1983 is a Fox affiliate which shares a duopoly with Bloomington-based CBS affiliate WTTV. The two sisters have studios located on Network Place at the Intech Park office development in northwestern Indianapolis. The transmitter of the channel is installed on West 73rd Street on the northern outskirts of the city. Charter Spectrum, AT&T U-verse and Comcast Xfinity are the cable carriers of the television.

UHF ch 59 previously hosted Lafayette based WFAM linked with CBS. It was owned by Sarkes Tarzian and went on air in June 1953. The channel relocated to UHF ch 18 in 1957 and UHF ch 59 would remained unused until FCC allocated it to Indianapolis.

Federal Communications Commission in later 70s started to take applications for Ch 59 in Indianapolis. In a joint settlement, Indianapolis Television Corporation sealed the license for the channel. The construction permit of the channel was bought by Anacomp, Inc. which was headed by Ron Palamara. Palamara made a pledge to launch the station by 1984 on the New Year eve but due to unfavorable weather the launch was extended to Feb 1, 1984 when it hit the waves as WPDS. The independent station would broadcast general entertainment programs, movies, dramas, sitcoms and cartoons. It was based at a studio facility on North Meridian Street in Indianapolis Television Row section. WTTV and WMCC hitting the waves on Nov 1, 1987 were the main competitor of the station.

Outlet Broadcasting in 1985 emerged as the new owner of the WPDS and changed its calls to WXIN on Aug 10, 1985.

It became a charter Fox affiliate when the network started its operations formally on Oct 9, 1986. WXIN went in the hands of Tribune Broadcasting on July 7, 1996. Under the new owners it would air court shows, reality series, talk shows and kids programming. In 2011, WXIN along with WSJV became the only full-power Fox affiliate to broadcast network’s content on its primary stations.

Nexstar Media Group following a merge with Tribune Media for USD 6.4bn in cash and debt, took over it assets including WTTK/WTTV and WXIN. The deal consummated after the approval of FCC on Sep 19, 2019.

Apart from clearing all of Fox network’s content, syndicated programs aired by the channel include Steve Wilkos, Daily Mail TV, The Drew Barrymore Show TMZ on TV and Maury. WXIN hosts 62.5 hours of locally produced news-bulletins each week with 10.5 hours on each weekday and 5 hours on each Sat and Sun. Indy Sports Central Overtime, IN Focus, Fox59 NewsPoint @ 11 and Football Friday Night/ Fast Break Friday are the popular programs aired by WXIN. Lindy Thackston is the popular host of the station.